This was my fifth attempt at Spartathlon. I knew before hand that it would go well. People were expecting a repeat of last year and so was I. The Spartathlon photography club had put a poster of me finishing last year in the main square of Spartathlon. 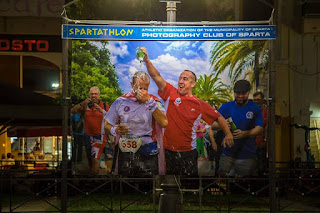 I even had a guy from the Philippines called Fermin come up to me and ask to have a picture taken with me. He told me I was his inspiration and hero. I told him he needs better heroes.

After I failed...that weight of expectation was so hard to deal with. I really have let a lot of people down. I can't do that again and hold my held up with any level of self respect.

WHAT.
A.
COMPLETE.
CUNT.

I think know what has been happening. I have been struggling weight as always and tried going low carb/high fat. But that does not work. The only two things that have worked are

1) fasting
2)What I shall call the teenage body builder diet.

The fasting worked last year, but I only used that because in late 2014 I had a hernia op and was not allowed to run. I went from 74 kilos down to 67 over a period of three months. Then put weight on and finally lost it down to 67 just in time for 2015 Spartathlon.

This year the weight just wouldn't shift no matter how little I ate. That little food, less than 1000k a day meant training at speed was difficult. I was waking up at three in morning soaked I sweat. I talked to three nutritionists and none of them came  up with anything  worth doing.  None of them suggested anything I din't know already.

Eventually in early August one of my neighbour's sons gave me a diet to follow and I dropped about three kilos in six weeks. Now I am back from Spartathlon I will maintain that diet with the aim getting to a proper racing weight of low sixties. The less weight one carries equates to faster performance and less food required. It will also me a lot more positive out look in a race and less to get loow blood sugar levels.  I have called this goal the boyband abs...

No matter how much time I have on a cut off or the fact I can keep going,  as I am not really injured I just don't want to do it.

I lose this desire and then as I stop , I start shivering  like a southern softy on a night out in Newcastle.

If I I am lighter, like at last years Spartathlon, then I move faster on less food.

The first 20km was fine , a little  fast but ok. then my quads started to seize a little. This was annoying but easily dealt with by the simple strategy of telling them to fuck off. I knew the speed I was going was causing the pain but while should that stop me
.
The heat was no an issue. Mainly because I train in bin bags, but also because it was a rather cold for Spartathlon.

I hit the marathon point at 4:20. 15 minutes slower than last year but still 25minutes inside the cutoffs. Not an issue. Russell Tullet said to me that this second marathon was mine as he gave me something to eat.

Unfortunately the Speed kept dropping and I went into run-walk mode. I realised that was definitely due to not training fast enough.

But I wanted  to finish for Fermin and that is what kept me going.

Met I met a rather good runner called Iris Vromans and my mood started to improve. Helping her and getting us to maintain the time on the cutoffs gave me a goal. Iris was very entertaining as well and we chatted about all sorts of stuff. She has done quite a few races that I have done so that was nice.

Unfortunately I lost her at Corinth, as I had to have a dump. By this time I still had 20 minutes on cutoffs. Still fine really, even if I was now an hour and twenty minutes slower than last year.

Just after cp 29 I found a bunch of Americans and ran with them Paul and Moss are two of the names that stick out. It was getting dark and my head lamp was at cp 30, so I had to draft in their shadow to stay up with them and see where I was going.

I got to cp 30, picked up my torch and a rice pudding and notice how cold I was getting. I borrow a shirt from Moss and carried on. but not before his crew complained about a speck of rice pudding on his car.

About this time Rusty Rusk marched past me going faster than I could run.

I got to the hill before cp 32 Halkion and walked up. Constantly having a battle with myself
about whether to stop on not.


I got there and the Americans where gathered around the cp board arguing about the time to the next cp. I pointed out the next big cp was at Nemea about 10km away and they had  two hours to do it in. That is a piece of piss.

They went off and I saw Sarah Dryden and Russ Bestley in their crew car with their runner Paul Rowlinson.

That did it for me.
Sarah tried to get me to go on.
I could have done so physically.
But mentally I was done.
When I am in that state nothing can get me going.
I hesitated over signing the quit form...but no long and I was out.

Later I went to the lavatory and was pissing blood for the first time. It is entertaining to say the least to see a bright red stream spewing forth from whence white normally comes.  It was as if I opened a bottle of Chablis only to find the contents had been replaced with a fine Cabernet Sauvignon.

The next day it was good seeing the other runner's in. Especially Mich Hardy who finished right on 36 hours.

If I could only sort this head issue out...I would have been there as well...
It really does annoy me. More experiments are needed. to fix the head.

Still I also got to see Nik Petalas who reminded me  of the phenomena of the second time  failure.  The person who finishes Spartathlon  on year fails the next...that's me  folks 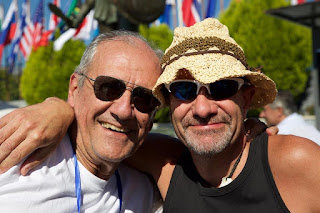 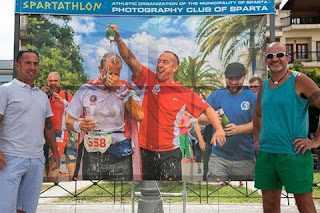