Not so bad really

Now I have calmed down and got over my hissy fit it is time to write a detailed blog about the this race.

I was quite heavy going into it, 73kg, but feeling very strong physically and mentally. I was hoping to do 210km at least. The aim was to run 6min kms as long as possible.

To do this I prepared a food plan. Essentially it was


1*500ml of Sisgo or Tailwind with a gel in the hour.
I bought my 20 of my favorite powerade bottles, labelled them 1-24,pre filled the odd numbered ones with tailwind and the even with sisgo.
2 chocolate biscuits on the quarter hour

1 mini Mars/snicker on the half hour
A few Pringles and cubes of cheese on the three quarter hour.
Ever four hours had a rice pudding with magnesium granules.
For the evening between 12 and 6am I had a can of redbull and some caffeine tablets. 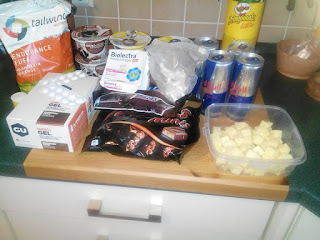 Thanks to James Elson for the idea of a regular plan.


This was my first big mistake. Too many shoe,  too much food and not enough clothes...

I traveled to the race from Frankfurt via train. First class...I thought that would be comfy...but then my back spasmed and it was very painful. I had some volteren forte gel in my bag so I spread that on to ease the discomfort and reminded myself not to moan as some people I know can't feel a thing below the chest.

I got to the hotel checked in and had a long soak in a lovely hot bath. The hotel came courtesy of Andrew Ferguson. He was planning on crewing Izzy Wykes at the race but unfortunately she was injured. Chiz chap it was a back saver.

Mark Cockbain on my knees... Too low down though. I wanted his name facing me as I ran and it wasn't.
Dwarf on my chest and Jo on my back. 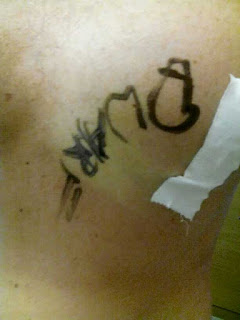 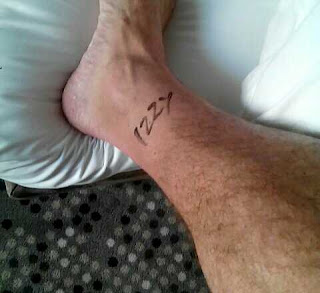 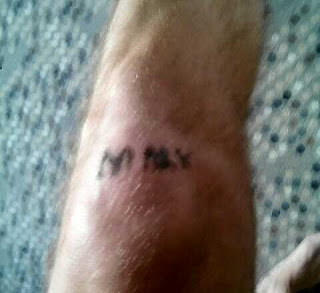 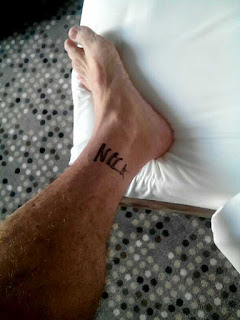 The organizers did a good job. A nice flat 1.1 km course with gazebos down one side for kit/ food and  benches and tables to put it all on. The benches became vital later. 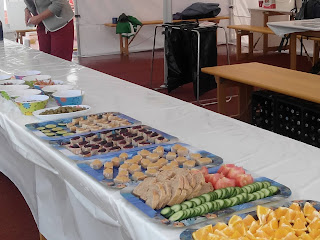 There are as talk or a storm in the evening but the race started at midday in sunshine.
Just before the race a couple of people commented on my Sparta tattoo. One of the Germans said he saw my finish with the martini. This cheered me up loads.

I started running smoothly and on pace. The food was working wonders nothing could go wrong surely?

I had the usual wobble between 30 and 60km that I put down to all the glycogen being used up and moving to fat burning. I was running really well. I even had time to watch the footie being played on the pitches in the middle ground.

My back tried to spasm at around to 35km but I just shouted Jo at it and it went away.

The wind picked up in the mid afternoon and blew the gazebos over. The organisers had this covered and soon set things right again pretty quickly.Then the rain started at six pm. I threw on my montane minimus and carried on. I was still on target. Slowing a little but on target.

it would have been handy to have some crew to help but as laid my food out neatly I was not losing too much time  picking up stuff. 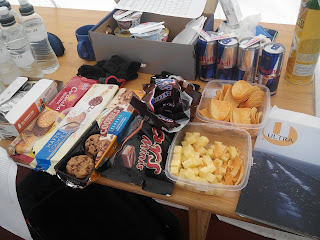 I notice that a few Spartathlon winners were there Stu Thomas and Jens Lukas..Bloody hell they were fast. Also fast was a Swedish lady Maria Jansson  who had admired my tat. She said that Sparta was too hot for her.  Seeing the speed she was running I thought it wouldn't be enough of a challenge.. She finished with over 240km. Turns out she is  European ladies champion.

By 10ish I was cold and slowing to 6:30- 7 min/km. Still good  enough for my target. The rain had not let up and I was soaked to the skin. I  changed to the last pair of dry tops that I had and carried on. I had started moving up the rankings and very happy. I was think how much fun it was going to be to tell Mark Cockbain that I had beat his pb in the pouring rain.

By midnight the dry clothes were soaked again and I begged a top and plastic pack a mac from Jen Vieler race director of thttp://www.tortourderuhr.de/. He is an excellent chap and I hope to see him again at the Spartathlon.

By two am I was now 24th overall and 5th in my age category. Considering the quality of fields I was well happy.

Then I made the second and fatal mistake. I took my red bull and decided to sit down.

NEVER EVER SIT DOWN IN A RACE.

How many times before have I been told that? What a stupid idiot.

I started shivering so much that I could prepare enough milkshakes for MacDonald's a month.

for all their branches

I was told to have a hot shower to warn up and wrap up in a space blanket. I took some rest I tried to go out again at four am only to be advised not to as my shaking was letting up.

I ended up returning to the hotel and then putting all my dry clothes on and returning home .

Disappointing yes. But look at how consistent I was compared to last year. The big spike is the toilet break I needed. I think that is a sign of improvement. 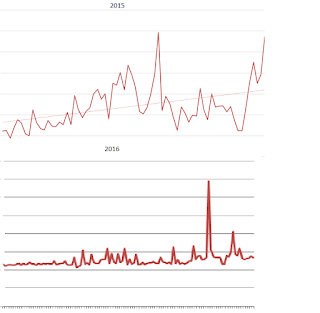 I am going to try again in June or July but really need some crew.
Probably here http://24-stunden-lauf.de/index.php
Any volunteers?