Having done my first twenty four hour race, my respect for the GB 24 hour has gone stratospheric. Being disciplined enough to maintain the pace they do is quite an achievement. It is so hard to do that.

I  was  disappointed in myself, very disappointed and I am normally that way after a race for at least a week after a race. That is normal. I recover quickly  and to me that means I  don't  push myself hard enough in a race. So now that first couple weeks after the race is over and I now I have had time to properly assess my performance I can write sensible blog.

I  know the potential is there to do a lot, lot better and I am nowhere the limits of my endurance. All that is missing  is a few mental tweaks and then I will finish a race and be so completely  fucked I won't  be able to move or even think.

Then I will have  something to be proud about.

That day is coming I know it. I learnt so much this weekend about how to adjust my performance so that the day is even closer.

My preparation went well, although  I  have  had a niggle in my hamstring since the end of February  that just won't go away.  It only starts bothering me when I run fast doing interval or tempo work.  As this race was all about pacing slowly and consistently  it didn't  bother me and it is not an excuse.
As I am a contractor, every day I take off costs me a lot of money and I  have  a lot debts to pay off so I  can ill afford it. Therefore  as the race started at 15:00 on Saturday I decided to take the train there and back. There was a train drivers strike in Germany and that meant some of the trains I planned to take were cancelled.

I  managed to get to the village of Steenbergen  via five trains, one bus and eight hours. As Neil Bryant said, I should have worn a tracker.

On arrival  I was issued with my race number and started to get changed. As I was doing this Bridget Brady arrived. I first met  Bridget at Spartathlon  in 2012. That time she had been pulled and put on the crowded death bus.  Then she had to endure a fat drunk sweaty Englishman next to her for the next six hours who didn't stop talking and had gone further than her. Poor woman.

I  was quite please that almost the first thing she commented on was how much weight I had lost in the last three years. It  is at least six kilos

We arranged our food supplies in boxes at rear of Bridget's car in the refreshment zone. I had loads of stuff. but I am still a chunky guy and need loads of food.

Bridget asked if I had any gels and when I pulled out the bin bag containing the 50 or gels she was a tad shocked I had so many. I love sugar and this stuff tastes no different to me.

We went off to the start where there was an MC who made announcements throughout the  race. He made a bee line for Bridget and chatted away to her.  After that every time we went by he had a few words for her. Dorty old man

The pace we started out was very slow. 6:30 per km. Maybe that was too slow.
The weather was OK. A bit blowy to start with and after a couple of hours we had a some rain for a while. Nothing to worry about  though.

I ran with my water bottle  and sipped constantly. I hit my usual miserable stage around 45km where I question why on earth I am doing this and how rubbish I am at it. The new fat gel that I made for the race from Greek yogurt, butter and macadamia nuts worked a treat and pulled me through that first dip quite quickly. The first thing I have  noted for the future is  that I  had laid out of my food wrong.  I  had it merely dumped in a box and it was not well organised.  The next time I will prepare it better with a set order  of food for different laps like I normally do for 50km  & 100km  races.

We were slow and quite a few people lapped us early on. I  was not worried as I  knew our slow constant pace would pay off in the long run. I  said to Bridget that we would  make up loads of distance on them during the night.

As the night drew in the organizers  laid out jam jars  with  tea lights in.  Quite  a nice touch I thought.  There was a lady called Anne Van Dalen walking bare foot in the opposite direction for most of the race encouraging  us. That was also a positive thing. I  noticed  she picked up the rubbish  the runners dropped which was very thoughtful  of  her.

We were  definitely  slowing down and around midnight Bridget took a time out in the car for a short nap of about  15 minutes. It didn't  help my speed and motivation that number of runners had dropped from 50 to at most a quarter  of that as most people snuck off for a break. I felt very sorry for myself  plodding around on my own.

I need to learn to pace myself in the middle of the night and run a  the same pace as earlier  rather than slowing  down.

At around three am I needed a dump and I  laid the biggest single cable I have done in a long while. That thing was at least a meter long and proof I was eating well. There were two portaloos on the course  and as I am used to festival toilets I was not expecting this to be a pleasant experience. However I noticed how clean the toilet was and very well stocked with toilet paper. I  wonder if it was Anne cleaning the toilets. Whoever it was I thank them very much.

After I caught up with Bridget  she said
"We are running  really slow at the moment, but I have an idea Rob'
'What's that Bridget?"
'We run fast  for two thirds of a lap, and then  power walk for the other third.'
Muggings here thought that was brilliant. And volunteered to do the running pacing. I surprise myself at my own stupidity.


This really worked on my mood and speed. When I ran with Bridget and had a job to pace us round I was fine. I really felt like I was achieving something and the pace was really good.

Left on my own while in the walking break I  drifted back to feeling sorry for myself.
After the third lap of doing this I learnt to just ignore him by distracting myself with minute examinations of my surroundings. When I  was running I had a goal and got us there. When we were  walking I didn't have a goal   and drifted back. My chimp came out to play and bug me. Really moaning about how hard it was and that I should quit. When I distracted him by looking at the surrounding countryside and raising questions, my walking tempo increased. So run walk when tired is a good strategy  during the night as long as I distract the chimp.

Be in the moment  as those hippys say.

A little later Bridget complained that our walking sections were too slow. I was rather ungentlemanly and pointed out that she was setting the walking  pace. Nevertheless I lengthened the running section per lap so that we ran nearly two kms of it and only walked in the refreshment zone.

The food was good. I didn't  feel sick and had enough to eat. It was just that it was not well organised  so it  delayed me as I  made a decision  what to eat when on almost every lap. That wasted loads of time.  Macadamia nut are top top food. Try them on your next ultra. Full of fat amd crunchy. Perfect.

As we got through the early  morning  my C goal of 160km or one hundred miles got closer and closer.  Strangely this cut my motivation  some what. About this time Bridget found out she was third lady and in with every chance of finishing  second.Now I truely  believe  goals work. Having a goal to reach really motivates me at least.

But the b of 211 was far too far away to be realistic and of any use in the race. A bit like my weight goal of dropping 10kg for the last few years and never reaching it. Now I  target half a kilo a week as it is better to target  incremental  losses per week.

Another lesson learnt is to set them closer together and closer to reality, realistic if you like.

I reached my C goal of 100 miles and took the decision  of pulling  out  at 160km  and 21 hours 30 minutes.and pulled out to make  my way home. I  set off around 1:00pm and got back to my flat at around 10:30pm.  I will never travel by such a circuitous route again. If I do this race again I will rent acar and drive up the night before.

The next day I woke up and apart from a little stiffness I  was basically  fine. Which goes to prove that I didn't  push myself anywhere near my limits.  I  think it is an interesting problem...how to motivate when alone. I am determined to crack it. 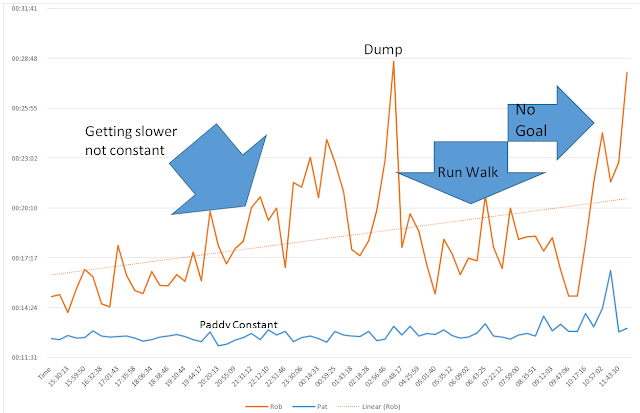 Several point to note for the future.

1) See how constant Paddy's pace was compared to mine.

2) Note how I was gradually slowing throughout the night.

4) Note how the pace drops as I approach the goal.  and motivation  to run  further goes.

The organisation was really good. Pre race I asked a couple of silly questions about getting there and got helpful detailed replies. The course was very well marked out.
Would I do the race again? Definitely. It was cheap as chips at €70. Next time!

Could I  have  gone further  and stuck with Bridget to finish  with 180km? Of course I  could have.
In summary

1) Drive there
2) Organize my food better
3) Employ run walk at night with distractions.