That went well!
A lot better than expected and I conquered my demons. More to the point I know where they come from and how to get rid of them now.

Bottrop is less than an hour from the flat I stay in during the week so I  jumped on the trains and made my  way there.
I met an old friend Bridget Brady and a couple of her pals. Which is always nice.

The race is a 1.2km loop around a park. Fairly flat and mostly tarmaced path. There is a well stocked refreshments tent staffed by very experienced people.


I placed my gear just after the refreshments tent. I bought a chair with me to rest on and a couple of bags. One bag had clothes in and the other stocked with food.


The clothes consisted of

he food consisted of


The race started at 11am which I think is a good time. Those that start later mean you have longer to go after sunrises on the second day. As I wrote in the pre race blog I was determined to keep my head straight. Ian Hopkins my running pal in Germany was convinced that it was to do with the gels so I wanted to stay off them.


The first couple of hours went well in the heat .  I was taking proper five minute walking breaks every 30 mins. I would eat a bit of peanut butter porridge each 30 minutes. I changed my shirt every three hours shorts & socks every six hours

33km four and a rice pudding


47km in six and a complete kit change and a Greek yoghurt. 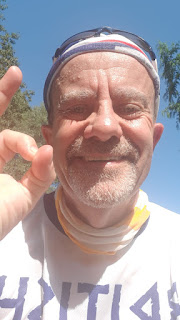 Then my time keeping and note taking went a bit off. I was focusing on my four pebble breathing meditation.
I also enjoyed myself chatting to people I know. One guy recognized me from my Spartathlon finish and said they used me as an example.

Which was nice. Another guy,  one of the official timers,  recognized me from TorTourdeRuhr from 2014 as he leant me  his phone so that I could quit.  This time  I was determined not to.


I know I  took a couple of half hour breaks overnight and walked a lot. An awful lot. I bored poor Sarah with my incessant chatter.


Some time around four am I was eating some peanut butter porridge and chucked it back up. This didn't upset me at all and I kept my head straight. I just walked back to my kit, sat down, brushed my teeth and took some mouthwash. Then I got up and kept going.


I was mainly eating TUC biscuits and brezels. No gels at all.


I liked that I continued to the end and covered just over 126 km in the 24 hours. So a rubbish distance to be expected as I am very heavy at nearly 80 kgs.
I  felt really  good in the last few hours. So much so that I worked out with a bit of effort I could get my third best distance for a 24hour. Which I just went and did.


Very happy as you see from the medal picture. 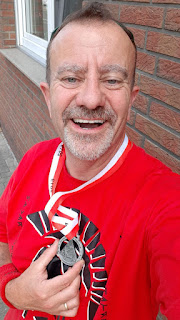 Lessons learned
I am now looking at another 24hour to get that pesky Spartathlon qualifier.