I have just got back from  crewing Paul Ali on  Spartathlon.  I returned in a lot better mood than last year and rather inspired. It was nice chilling with Tom for the six days.  We met too many people to list in detail and came away with load of stories.

Some of the stories that stick out

Meeting & helping all the runners and crews all through the race, but mainly at CP22.

Running down the road after Jonni  screaming "safety pin" with Gill Thomas shouting back "I have one:" I think the help we both offer  makes Gill and me  the Spartathlon Mom & Dad.

Getting the South African  lady auto assistance at midnight in Ancient Nemea to "fix" her car that wouldn't start.  It was a true blonde moment...the car was still in gear.

Getting a lady s caps at Nestani fro her runner despite the fact she was very rude.

Hearing "Hello, hello" very quitely at Nestani,  looking round and not finding anyone there.  I thought I was hallucinting,  but it was Steven Scobies partner who is shorter than me and I had looked over her head.

Hanging out with our Tom, Sasha, Lance, Rowli, Handsome Tom at checkpoints  on day two.

Seeing Jonni running down the road screaming "PEANUTS! I AM EATING PEANUTS" immediately before he threw them back up.

Talking to the poor DNFers and understanding, especially after four failures myself,  how hard it is.  I don't think the runners who finish this  race the first time, can truely appreciate how bad, how disappointed, how truely sick with themselves,  a runner who has put years of effort to get into this race and then DNFed feels.

I spent Monday evening getting drunk with two of them and became more inspired.

I got myself a little red Moleskin and have started to get fit myself.  I have just less than 100 days to get ready for the Athens 24 hour and get a qualifier... 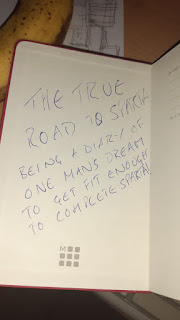 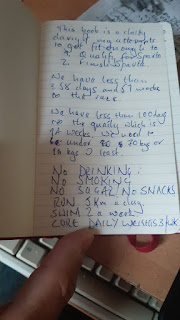 As Mark Cockbain would say "JUST GET IT DONE!"